Dreams do come true at CSPA!
The Conservatory School of the Performing Arts is thrilled to announce that our student, Stella Cobb, has been cast in the first national tour of Disney's mega-hit musical, FROZEN! Stella will originate the role of "Young Anna" in the highly anticipated tour of this popular Broadway production. Stella started out in our Recreational Musical Theatre program and trains at CSPA in vocal performance, acting, and dance. She was scouted by Kennedy Talent Management (KTM) while attending our Summer program this past year. On behalf of the entire CSPA family, we are so proud of you Stella!

Boston Herald 9/30/19
STELLA-R NEWS! A young Massachusetts native was just cast in the North American tour of FROZEN, THE MUSICAL and we can't let it go! Stoughton's own Stella Cobb, a 9-year-old student at The Conservatory School for the Performing Arts, will be stepping into the spotlight as she portrays the role of Young Anna in performances across the nation starting later this fall. The rising star has already headed down to New York City, where she'll be rehearsing for the next two months before the show opens on Nov 10. Cobb will be hitting the road and stopping in at least 10 cities to sing and dance her way through the Disney favorite with the rest of her cast through next summer. 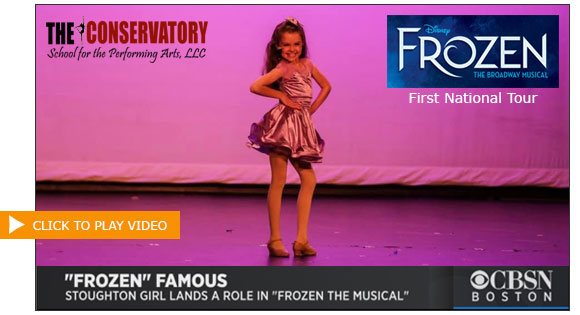 Monika Benson, Stoughton native and Pre-Professional dance student of The Conservatory School for the Performing Arts was named Miss Dance of New England 2016. On Thursday, June 30, Monika and her dance teacher Erika Frank traveled to Nashville to compete for the prestigious title of Miss Dance of America. Monika competed in ballet, tap, jazz, modern, interview, scholarship classes, and competed her lyrical dance solo, titled “Schindler’s List.” Her solo was choreographed by The Conservatory School for the Performing Arts Owner and Artistic Director Frank, and is dedicated to Monika’s great grandfather, who was a Holocaust survivor.

On July 7, Monika Benson was named one of the top 10 finalists in the Miss Dance of America National Competition. Along with Monika’s top 10 placement she was also awarded a $1,000 college scholarship and won the third place $75 award for her modern scholarship audition class.

“Monika has worked so incredibly hard for all of her achievements, and she is a great role model for all of our students,” Frank tells Snyder’s Stoughton. Under the direction of Frank, Monika was awarded an $80,000 scholarship to Dean College School of Dance, and will be attending their program as a dance major this fall.

Congrats to CSPA’S Pre-Professional dancer Khandice Anselm, who was named the first place runner up for the title of Miss Junior Dance of New England. Khandice was also awarded first place awards in jazz, tap, and acrobatics.